Sometime in 1990, I snuck and watched Do the Right Thing. Yes, there was the was the conflict about the pictures on the Wall of Fame. Yes, there was the death of Radio Raheem, who wore those killer (no pun intended…well, maybe a little pun intended) Love Hate rings. Yes, there was the neighborhood riot. But none of that gave me life like the opening credits with Rosie Perez hip hop dance punching across the screen to Public Enemy’s “Fight the Power.” With her perpetual scowl of pursed lips punctuating every hard, jerky motion, my nine-year-old self stared awestruck. The nearly four minutes of red-soaked lighting and Ms. Perez’ petite, curvy frame confirmed what I already knew: I was born to dance!

This wasn’t the tutu, ballerina pointe shoes, or jazz hands dancing my friends’ moms ushered them to twice a week. This wasn’t the head down to the local JCPenney or Glamour Shots studio for a cute little posed portrait dancing. Uh-uh…this was powerful, in your face, graffiti in the background, street dancing that threatened grandmas’ sensibilities. This was “sit yo’ ass down somewhere” dancing. This was go upstairs, close and lock the door to your bedroom dancing, and I loved it!

Somewhere around the ninth grade, though, I realized that the next Rosie Perez would not be me. Perhaps it was my underdeveloped, gaunt frame. Perhaps it was my thick glasses and propensity to spend more time reading and writing than studying the art of dance. Perhaps it was the fact that Rosie’s alluring New York styled Puerto Rican homegirl accent alluded me altogether. Whatever the real reason, my calling, alas!, was not to be a hip hop dancer.

I look in the mirror now and wonder who the heck is standing there. This is not the same girl who gyrated freely in loose fitting, size XS crop tops (yeah, I was that skinny) or who marched confidently as one of the only black female drill commanders in J.R.O.T.C. or who told an out of touch middle aged white male superior, who had just given her the summer teaching job, why Go Ask Alice was a piss-poor choice of “literature” for a group of urban black teens who knew they would be college graduates one day. Who is this meek, validation seeking, guilt-ridden woman with eyes like mine staring back at me?

There is something sinisterly ironic about an existence where you spend your formative years hell-bent on growing up so that you can have the freedom to live your authentic life only to grow up and feel more trapped than ever. I just cannot do it anymore. I am so tired of waiting for permission to be exactly who I think I am. I no longer want to be afraid to seek my own happiness. I don’t want to live in fear of letting people down. I cannot stomach another year of being the reliable “good girl” for everyone else but me.

I’m tired. So you know what that means? I need to get up, channel Rosie, don some boxing gloves, and fight the powers I’ve let control me for much too long. Cue the music… 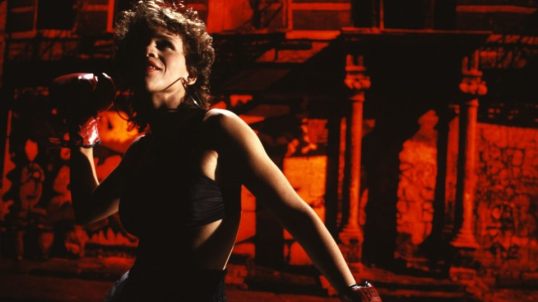 Rosie Perez dancing to “Fight the Power” (photo from Oscars.org)