A Note on Ebert

I learned to type on my mom’s typewriter. I did research the old-fashioned way: by going to the library. Classic literature inspired me, made me dream, and I was often found sitting quietly in some corner or another lost in Shakespeare’s iambic pentameter or Baldwin’s heavy allusions.

Then, quite all of a suddenly, I found him. I’m not sure how old I was exactly, but I know I was in college. My dad purchased a computer for me as a high school graduation present, and my university gave us “free” Internet as part of our room and board package. By the time I found him online, although I had met him years earlier while watching television, I had begun to use my computer for more than just writing papers for classes. I was searching for a bit of entertainment.

When my friends were getting ready for parties or heading out for a little flirting on the quad, he talked to me about the latest movies. He was smart and funny and insightful. I looked for his approval before I went to the theater with a date, and when I did venture out on my own, allowing an enticing trailer to trump his tried and true wisdom, I was, more often than not, sorely disappointed. I crawled back home with tail tucked between legs vowing never to go against his advice again.

Sometimes, though, I would forego his words for a while and sneak out to a movie to see something on my own. I would scrawl on napkins, the backs of receipts, or in the margins of my Art Appreciation notes my own mini reviews. I’d try to be witty or intellectually sarcastic or passionately moved, but when I read what he wrote, I realized my own limitations as both a writer and observer of films.

I remember my second year teaching Advanced Placement English. I had a group of “non-traditional AP students” who wanted nothing more than to be successful readers and writers. I struggled finding a way to hook them, teach them the basics, and stretch them beyond their own imaginings of their potential. I remember consulting him one night as I prepared to go on a movie date with my husband, and it hit me: “I can use movies and his thoughts about   them to teach the concepts they’re not picking up reading Wilde or Marlowe.”

Tone, a concept every one of my students understood when they heard it, was hard for them to pick up on when reading. I pulled his review of Deuce Bigalow: European Gigalo from the Internet, made 30 copies, and passed it out to students. All of the students that year had seen the movie, some even liked it, so when they read his comments about the film (although I think the term is too elegant for this movie), every kid in that class understood his tone.

I made him an integral part of my curriculum. As I got more skilled, I even began to use his words and film clips to teach freshmen who couldn’t read. The skills, films, and reviews were a focused, integrated network that proved successful in my practice and student learning. The best comments I’ve received as an educator came from students who declared, “You’ve ruined movies for me! I analyze every little thing now!”

“That low camera angle shows his rising significance in the community,” one student declared after watching a clip from Malcolm X.

Soon we were analyzing the paragraphs from Black Boy, pages from A Lesson Before Dying, and chapters from The Strange Case of Dr. Jekyll and Mr. Hyde. We moved from film clip analysis to literary analysis, and the students loved it.

Reading about his death yesterday made me reminisce on the many, many reviews I’ve read, consulted before a date, and used as instructional tools over the years. I feel fortunate to have had him share his insights with me. 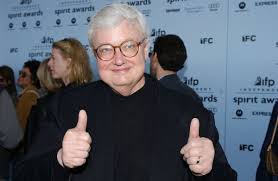 I used to fantasize, though, about sitting in the balcony of some majestic, antique theater with him eating nachos (because in my fantasies he didn’t like popcorn either). We’d laugh and take notes. We’d cry and connect scenes to others. We’d spend hours arguing about the relative artistic merit of films. Then, we’d get our thumbs positioned for a final rating. I guess that’ll never happen, but I’m glad to know that his words will still be there to inspire others. A blessing of the Internet!

2 thoughts on “A Note on Ebert”