What to Do with My 100 Followers

It’s official. I’ve garnered my 100th blog follower! Someone out there decided about a month ago that I was no longer worthy of following, but luckily, someone else decided that some poem or essay was good enough to warrant hitting that plus sign inside of the circle to help me forge ahead and hit an arbitrary target I didn’t even realize I wanted.

In real life, I’m not sure if there are even 100 people who would want to share a seat on the bus with me, but I’m grateful to all of you in Blog Reading Land for spending a few moments here and there with me as I pontificate, rant, obsess, and giggle through typing fingers about the stuff that crosses my mind. In honor of your commitment, or your button pushing, I’ve decided to relay a list of things we can and can’t do together as a cohort of Marilyn readers:

Yeah, let’s not do this! (image via webwallpapers.net)

1) We can’t defend Sparta from the Persians: We are few in number. We are mighty (with a keyboard), but we cannot rely on my athleticism or wartime strategy to keep us safe from Xerxes. I’m a punk! Okay, I’ll admit it. Don’t follow me into battle. I’ll be the first one crying and praying on my knees for God to send an angel to deliver me!

Now, I’ve had the time of my life… (image via mirror.co.uk)

2) We can reenact the final scene from Dirty Dancing: Years ago, my brother and I were freakishly obsessed with the lift that Johnny and Baby practiced over and over and finally nailed in that ending scene. I’m sure he won’t admit it, but my brother was both on the lifting and being lifted ends of those backyard practice sessions. Now, it’s been a few years, several pounds, and two babies since I’ve had any real inclination to “have the time of my life,” but given the right dance partner, (surely one of you 100 is strong and steady enough to hold me up) we can get it crackin’!

Appreciation dinner, anyone? (image via myonlinecookbook.com)

3) We can’t dine on my dime: As much as I would like to take you all out for a nice meal and spirits to thank you properly for your readership, my pocketbook just won’t allow it. Now, if you absolutely insist on some type of culinary appreciation, the best I can do is boiled eggs and tap water. Any takers? 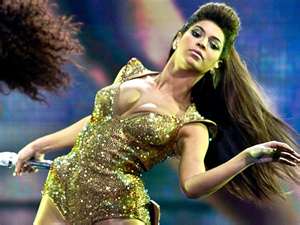 Get ya’ strut on! (image via jenniferbrix.com)

4) We can get our strut on as we move throughout the rest of the day: Ladies and gentlemen, I’ll confess that I was never part of the in-crowd. I was oddly thin with thick glasses and voice huskier than any other girl (or boy for that matter) without a deep-rooted smoking habit. But with 100 of you reading (or pretending to read) what I write, I feel a bit puffed up. Sure, there are some of you out there who had 100 readers after your first post, and you’re probably thinking, “That’s not that big a deal.” Well, guess what? It is to me, and in true swag fashion, I might just have to have a little Beyoncé “Get Me Bodied” playing in the crevices of my brain as I pimp through the rest of my day. Join me!